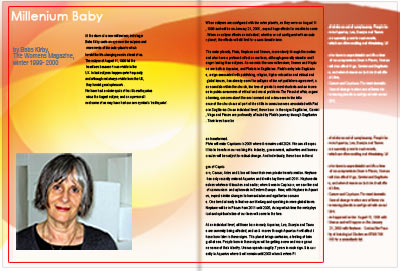 The above image is not representational of either WM - The Women's Magazine ,
or the article as was published.

There's a lot of excitement about the first babies born in the new age but what lies ahead for a child born in the opening moments of the year 2000.

The clocks have just struck midnight . The air is thick with noise, people cheering, celebrating the dawn of the new millennium. Somewhere a baby adds its voice to the cacophony for the first time. Its just been born, a millennium child. This is what that very special baby will grow up to be.

Millenium Baby
...this is your life

The Sun is in Capricorn, a serious, cautious, astute, ambitious sign. At midnight , of course, it is not visible, shining on the other side of the world. So it is placed at the base of the birth chart, a private insular position, suggesting this baby will develop into someone who is concerned with their family and personal life. They are likely to be shy and retiring, which may not help since Millennium Babies can expect plenty of publicity.

The Moon is in Scorpio, suggesting an individual with deep and intense feelings and it is at a 90 degree angle to Neptune and Uranus, which signals the media involvement. They will always feel special and different and may go on to occupy an extraordinary place in the world.

The Moon is also opposite Saturn, the planet of limitations and responsibility. This may well be the flip side of a remarkable position Millennium Baby will grow up to occupy. Many members of the royal family have prominent Saturn's, leading to the duty and obligations that go with privilege.

The rising sign, which describes Millennium Baby's approach to life, is Libra, which often bestows good looks and is concerned with justice, balance and harmony. Libra is an understanding, fair and reasonable sign. This outlook will help our baby accept the limelight into which it has been thrust.

Venus, the planet associated with Libra, becomes the chart ruler and is placed in Sagittarius, an optimistic, extraverted and gregarious sign. Even though they are shy, this baby will grow into a party animal!

Both the Moon and Venus are found in an area of the chart connected to money, and are indicating that he or she will have financial security in later life.

Mars is found in Aquarius, an individualistic and freedom loving sign, in a segment of the chart concerned with self-expression. This fits well with Venus so this baby will grow up to be charming and charismatic. And what Sagittarius and Aquarius have in common is a concern for ethical and humanitarian issues, something that will come in to play in later life.

As we all do, the Millennium Baby has contradictions. Essentially he or she will be a private, shy individual but with the capacity to develop great social skills and they will use the attention focussed upon them to their advantage.