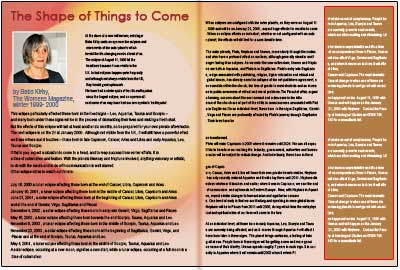 The above image is not representational of either
WM - The Women's Magazine , or the article as was published.

At the dawn of a new millennium, astrologer Babs Kirby casts an eye over the eclipses and movements of the outer planets which herald the life-changing events ahead of us.

The eclipse of August 11, 1999 hit the headlines because it was visible in the UK. In fact eclipses happen quite frequently and although not always visible from the UK, they herald great upheavals .

We have had a whole spate of horrific earthquakes since the August eclipse, and on a personal level some of us may have had our own symbolic earthquake'.

The shape of things to come

This eclipse particularly effected those born in the fixed signs  Leo, Aquarius, Taurus and Scorpio  and many born under these signs will be in the process of dismantling their lives and making a fresh start.

But the effects of this eclipse will last at least another six months, so be prepared for your own private aftershocks.

The next eclipse is on the 21 st January 2000 . Although not visible from the UK , it will still have a powerful effect on those whose sun it touches  those born in late Capricorn, Cancer, Aries and Libra and early Aquarius, Leo, Taurus and Scorpio.

If that's you, expect a situation to come to a head, and to reap success from earlier efforts. It is a time of culmination and fruition. With the planets Mercury and Neptune involved, anything visionary or artistic, to do with the media and to do with communication is well starred.

Other eclipse dates to watch out for are:

When eclipses are configured with the outer planets, as they were on August 11, 1999 and will be on January 21, 2000 , expect huge effects for months to come.

When an eclipse affects an individual, whether or not configured with an outer planet, the effects will still last for a considerable time.

The outer planets, Pluto, Neptune and Uranus, move slowly through the zodiac and also have a profound effect on our lives, although generally steadier and longer lasting than eclipses.

As we enter the new millennium, Uranus and Neptune are both in Aquarius, and Pluto is in Sagittarius. Pluto's entry into Sagittarius, a sign associated with publishing, religion, higher education and ethical and global issues, has already seen the collapse of the net publishers agreement, sex scandals within the church, the loss of grants to most students and an increase in public awareness of ethical and moral problems.

The Pinochet affair, organic farming, concern about the environment and a decrease in the influence of the church are all part of the shifts in consciousness associated with Pluto in Sagittarius.

On an individual level, those born in the signs Sagittarius, Gemini, Virgo and Pisces are profoundly affected by Pluto's journey through Sagittarius. Their lives have been transformed.

Pluto will enter Capricorn in 2008 where it remains until 2024. We can all expect this to transform our working life. Industry, government, authorities and bureaucracies will be subject to radical change.

And individually, those born in the signs of Capricorn, Cancer, Aries and Libra will have their own private transformation.

Neptune has only recently entered Aquarius and it will stay there until 2011. Neptune dissolves whatever it touches and earlier, when it was in Capricorn, we saw the end of communism and upheavals in Eastern Europe . Now, with Neptune in Aquarius, expect similar changes to humanitarian and egalitarian concerns. One trend already is that we are thinking and speaking in more global terms.

Neptune will be in Pisces from 2011 until 2026, during which time the metaphysical and spiritual sides of our lives will come to the fore.

At an individual level, all those born in early Aquarius, Leo, Scorpio and Taurus are currently being affected, and as it moves through Aquarius it will affect those born later in these signs. This planet brings confusion, a feeling of being all at sea. People born in those signs will be getting a new and more genuine sense of their identity.

Uranus spends roughly 7 years in each sign. It is currently in Aquarius where it will remain until 2003 when it enters Pisces before moving on to Aries in 2011.

Uranus is the planet of awakening and its effects are often sudden, alarming events that shake us out of complacency. People born in Aquarius, Leo, Scorpio and Taurus are currently prone to such events, which are often exciting and stimulating. Life for them is unpredictable and it's a time of no compromises.

Once in Pisces, Uranus will also affect Virgo, Gemini and Sagittarius, and when it moves on to Aries it will affect Libra, Cancer and Capricorn.

The most dramatic time of change is when one of these slow moving planets is configured with an eclipse, as happened on the August 11, 1999 with Uranus and will happen on the January 21, 2000 with Neptune .